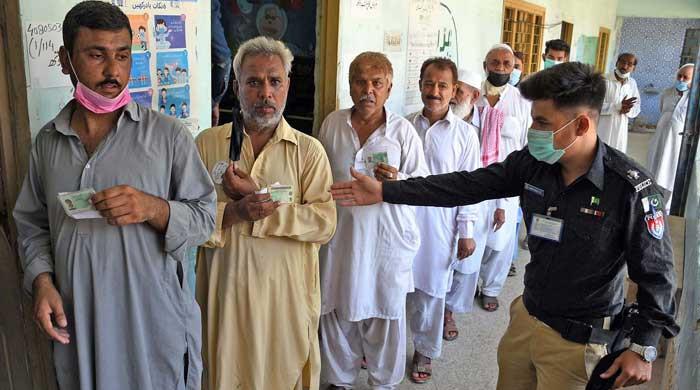 The Free and Fair Election Network (FAFEN) said in a detailed report on Friday’s election that more than 100 violations of election rules were committed during the NA-249 by-election in Karachi on April 29. Let’s see

“On election day, FAFN-trained civic observers committed 143 violations, including the presence of party camps in the vicinity of 55 polling stations,” the report said.

In 11 cases, polling staff did not allow voters to cast their ballots and sent them back, the report added, adding that at 19 polling stations, observers found that COVID-19 SOP had not been implemented.

However, the report said that the Election Commission of Pakistan (ECP) has ensured strict adherence to the standard operating procedures of COVID-19 as a whole.

“The other 58 incidents of violation are related to irregularities in the rules, especially in the voting and counting process. On average, observers reported 1.3 violations per polling station,” he said.

In NA-249, 12 political parties fielded their candidates while 18 candidates contested as independents.

The detailed report said that the by-elections saw a significant decline in the number of voters, mainly due to hot weather and Ramadan.

“Despite the competitive campaign, the turnout was recorded at 21.6% of registered voters – which is less than 40% of the constituency during the 2018 general election,” he noted.

FAFEN observers asked voters how satisfied they were with the voting process, to which voters outside 98 polling stations – 18 men, 17 women and 53 combined – expressed satisfaction. “In contrast, outside the rest of the polling stations, voters said they were partially satisfied.”

It said observers found substantial amounts of election material at all polling stations they observed, except for two incidents of unauthorized persons going behind a secret screen at two polling stations.

“There have been no other incidents in which the privacy of voters has been compromised. Except in two cases, observers have not tried to persuade party workers inside the polling stations,” the report said.

“However, about 18 polling stations – each male and female in five and eight combined – had more than one booth in a room.”

The statement said that polling agents of the contesting candidates were present at all the observation polling stations, adding that everyone was in good condition and could easily observe the process.

Change in vote shares between parties

The report noted that in NA-249, 12 political parties fielded candidates while 18 candidates contested as independents.

The party analysis shows significant changes in the share of votes of different political parties.

The NA-249 seat was vacated due to the resignation of PTI MNA Muhammad Faisal Wawda, who became a senator in the March 3, 2021 elections.