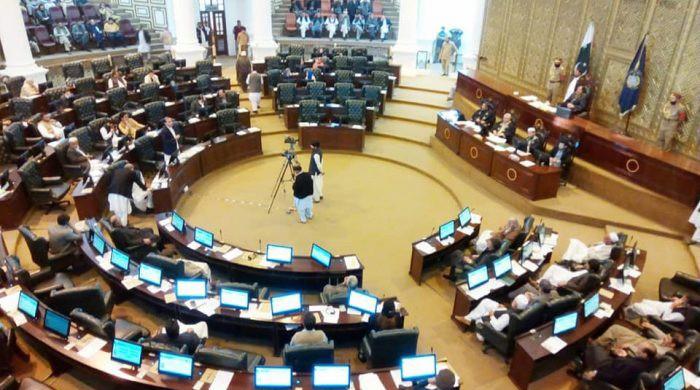 PESHAWAR: The Khyber Pakhtunkhwa Assembly on Monday unanimously passed a resolution condemning the killing of innocent miners in Machh area of ​​Balochistan and the killing of a student by Islamabad police.

In this resolution, Nighat Orakzai, Ahmed Karim Kundi, Shagufta Malik, Basirat Khan and Abdul Salam Afridi have jointly presented that the House condemns the brutal killing of Quetta workers in Islamabad and the police shot dead a student. And expressed sympathy to the bereaved families.

The resolution said that such killings and the deteriorating law and order situation in the country have caused uncertainty and anger among the people. He called on the federal government to take steps to protect the lives of citizens and bring the perpetrators to justice as soon as possible.

The resolution said that the nation is united against the nefarious plans of the enemies and is ready to make any sacrifice for the sovereignty and integrity of the country.

Opposition lawmakers blamed Prime Minister Imran Khan for the deteriorating law and order situation and questioned why he refused to go to Quetta and how he used the word “blackmail” for the families of the victims. used.

Nighat Orakzai of the Pakistan People’s Party (PPP) said in a one-point order that the killing of 10 members of the Hazara community was a barbaric incident. He questioned who stopped the Prime Minister from going to Quetta and why he used words like “will not refrain from blackmailing the affected families” who merely visited the Prime Minister before the funeral of his close relatives. Demanded

He also blamed the government for killing student Osama Satti, asking why police fired 22 shots at an innocent boy. In his reply, Law Minister Sultan Mohammad said that the Machh incident was extremely barbaric and the entire nation was saddened by the killing of innocent Hazara coal miners. He said that targeted killings of Hazara community have been going on for years and their sacrifices were unmatched. He thanked the Hazara community for ending the protest in Quetta and said that Imran Khan had assured the accused to register a case.

The House also unanimously passed another resolution against the ‘two-finger test’ for a woman who has been sexually abused and called for a ban on such tests. A resolution tabled by Ayesha Bano of the ruling Pakistan Tehreek-e-Insaf (PTI) states that the method of testing the ‘two fingers’ used for sexually abused women is to protect their privacy and privacy. It is against integrity and immoral.

The resolution further states that such testing causes psychological distress and trauma for the victims, therefore it should be stopped and standard guidelines should be adopted for modern methods of investigation in cases of sexual violence.

Allegations of sexual harassment against ICUP have not been substantiated