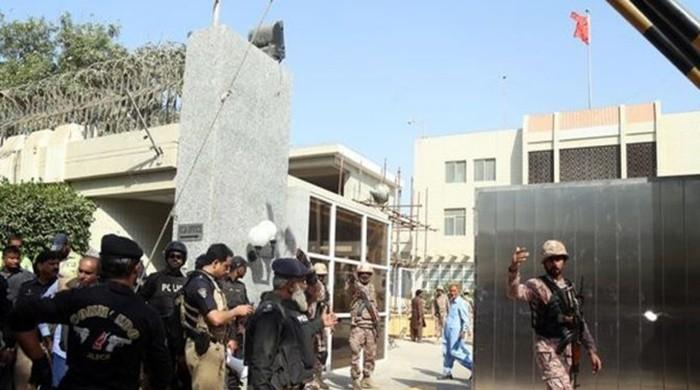 KARACHI: An anti-terrorism court has indicted five accused on charges of facilitating the attack on the Chinese Consulate in Karachi in 2018.

The accused include Ahmed Hasnain, Mohammad Aslam, Nadir Khan, Ali Ahmed and Abdul Latif, who are said to be affiliated with the ethnic rebel group Balochistan Liberation Army. The Counter-Terrorism Department arrested the attackers in January 2019 on charges of providing strategic and logistical support.

According to the investigating officer, Latif and Aslam had confessed to the crime before a judicial magistrate a week after their arrest. However, during the hearing in ATC VII, all the accused denied the allegations and chose to fight the case. The Chinese Consulate in the High Security Zone in Block 4, Clifton, was attacked on November 23, 2018 by three heavily armed militants. The attack killed four people, including security personnel and visa seekers.

The attackers, later identified as Abdul Razzaq, Raees Baloch and Afzal Baloch, were also killed in a gun and grenade attack with police. Large quantities of weapons, ammunition and explosives were recovered from the attackers. In addition to the accused, police have also arrested BLA chief Harbir Mari and other leaders Karim Murree, Bashir Zeb, Aslam Baloch, Noor Bakhsh Mengal, Rehman Gul, Nisar, Gandhi, Sheikh Sharif, Hamal, Agha Sher Dil and Munshi. The case was also registered. All of them have been declared outraged in the case.

At the last hearing, the court had directed the police to approach Interpol for the arrest of Herbier, who was living in exile and was allegedly planning an attack from a foreign country. The judge also issued arrest warrants for the fugitives.

The judge also ordered the confiscation of all movable and immovable property belonging to the fugitives and directed the investigating officer to release their sketches so that public assistance could be sought in tracing them. Earlier, the IO had told the court that neither NADRA nor the Election Commission of Pakistan had any identification data on the fugitives.

According to the chargesheet, the attack was carried out by the BLA in collaboration with the Research and Analysis Wing of the Indian Secret Service to damage Pakistan-China relations and disrupt the China-Pakistan Economic Corridor project.

It added that the attackers were in constant contact with Herbier and other suspects, alleged facilitators and terrorists. Four Kalashnikovs, two improvised explosive devices, detonators, grenades, explosives and ammunition were also recovered from the attackers, it said.