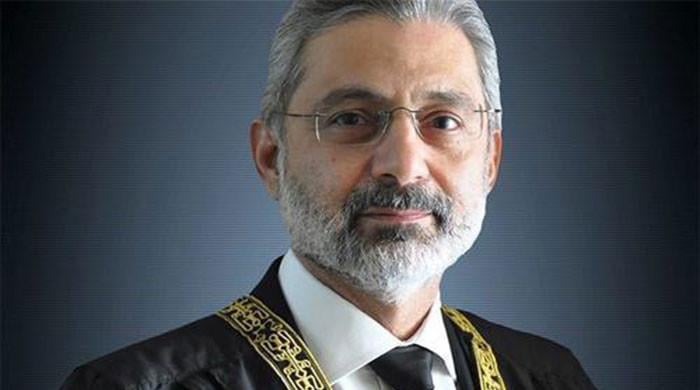 ISLAMABAD: The complete record of the case makes it clear that Justice Qazi Faiz Issa and his wife Serena Issa, through legal negotiations, withdrew their UK property, foreign transactions, source of income and family taxes. Answered more than a dozen related questions.

Serena Isa and her husband’s corruption seem to have reinforced this notion after the government’s legal team tried to answer all the questions with documents proving the evidence before the court.

Following this decision, the debate in and outside the court has raised a number of questions, with the decision being made on the basis of files and extensive material on the record to understand the beginning of this case. Give the answers to the questions raised by the government and the tax authorities to Serena Isa and her family.

According to a case study conducted by Geo News, more than 97 incidents (hearings and FBR proceedings) were recorded in Justice Issa’s case where some 17 lawyers, attorneys, judges and Serena Issa appeared before the Supreme Court. Present your arguments. Serena Issa and Justice Qazi Faiz Issa, private advisers, government legal team, bar councils, Pakistan Federal Union of Journalists and others have used more than 112 Supreme Court hours in the last 23 months. Both sides presented 5,130 pages and files with supporting documents before the Supreme Court and tax authorities during the proceedings.

Q) Who owns the UK properties, asked the SC and the government legal team.

Answer: The evidence presented before the court proved that the properties are the property of Serena Isa and her children, which refuted the government’s claim that Judge Isa owned these properties.

Question: Does Judge Jesus have anything to do with British property?

Answer: A thorough study of the case documents has revealed that not a single piece of evidence has come on the record to prove that Justice Isa is the owner of these properties.

Q) Who bought these UK properties, asked the judges and the government legal team?

Answer: Both the SC and the FBR admitted that Serena Issa had bought UK properties in accordance with the lawsuit and official records.

Answer) Not a single piece of evidence has come to light which Serena Isa had obtained through illicit source of income. The FBR and SC acknowledged the source of Srina Isa’s income and did not interfere illegally in the process.

Q) SC and tax officials were asked if Serena was involved in money laundering or hawala hindi while transferring funds to the UK.

Answer: The tax authorities clarified that all the transactions made by Serena Issa from 2003 to 2014 under the properties in question were legal. FBR records submitted to the SC also confirmed Serena’s position that she conducted all foreign transactions through legal banking channels. There was no evidence on record in the Supreme Court that one could say the transaction was not fair.

C) During the proceedings, two SC judges were asked to show purpose as child support instead of buying property.

Answer) Serena Issa convinced the SC through documentary evidence that she had slowly transferred money from the bank to the UK through the channel to buy one property after another over a period of 11 years while incurring educational expenses. Read the documents certified by the Supreme Court, the properties were jointly owned by him and the children.

Q) Asked the competent judges, were the children dependent?

Answer: It was also established by the case documents in the court that the wife and children of the judge under trial were not dependent. The children were paying taxes in the UK and Serena Issa was paying her taxes independently and was also filing returns in Pakistan.

Q) The SC asked the judges and the tax authority if Serena had declared her UK assets.

Answer: The documentary evidence presented by Serena Issa before the court, which was also supported by the judges during the hearing, revealed that after the enactment of the new law, she declared her assets abroad. Serena Issa, who wrote to the FBR several times after 2018 and before the presidential referendum, as documents show, has seen a sudden change in her RTO. Since the RTO case has been settled, the court has declared Serena as her property, in accordance with the documents equally verified by the court in its observations.

Question: Did the FBR take any notice to declare Serena a foreigner?

Answer: The tax authorities said that they never took any notice of Srina Isa or her family on this particular issue. During the hearing, the judges also endorsed the tax authorities’ view of the record, indicating that the FBR never issued a notice to the petitioner (Serena) not to “declare”. If anything She argued before the court that she was not filing a return to Pakistan because she quit her job soon after her husband joined the government service. “I was told in 2018 that the law had been changed and now I have to declare my assets in the tax returns, so I declared them in my return,” he told the court.

Q) Tax officials and the Supreme Court asked whether Serena has a source of income to buy foreign assets?

Answer: On the issue of whether Serena had legitimate funds available to acquire UK property, documents presented to the Supreme Court and tax authorities revealed that she had received gifts from Income, her father and hundreds of kanals of agricultural land. Earned through There was no dispute in the court about the legitimacy of the source of income.

Q: Did Serena hide one of her bank accounts in Isa’s possession with Judge Isa and ask the tax authorities?

Answer: FBR Commissioner Zulfiqar Ahmed in his 164-page report said that there was a local bank account linked to both wife and husband, the declaration contained undeclared foreigners and their immovable agricultural income. So this could be a different case. If SC allows them to proceed. The court did not confirm the FBR’s revelations. During the hearing, the judges took Serena Issa’s arguments on record when she questioned the legality of the term “money trail” and the FBR has the power to question the seven-year-old case because the last apartment. It was purchased in 2013 and the FBR began investigating it in 2020.

The petitioners cited references from 52 different cases, including judicial precedents from different courts, and a large amount of material was presented to the court as a case study. Judge Isa and his wife collectively spent 31 hours in the courtroom, where they either presented their arguments to the judge or witnessed the proceedings of their case over the past two years.

On her Spanish citizenship, Serena had already recorded the fact that she was a Spanish citizen and lived with her husband on an extended visa. There was no dispute over his travel credentials, which was equally acknowledged by the Supreme Court. During the proceedings, neither the government legal team nor any other party questioned his credentials.

Three questions from Justice Bandial to explain to Justice Isa “If he [judge Isa] After his appointment as Chief Justice of the BHC, he had nothing to do with his wife Serena Issa’s accounts, money transfers and the purchase of British property, however, no response was received.

The UK imposed travel bans on Turkey, Nepal and the Maldives