Flaws in the PDM strategy 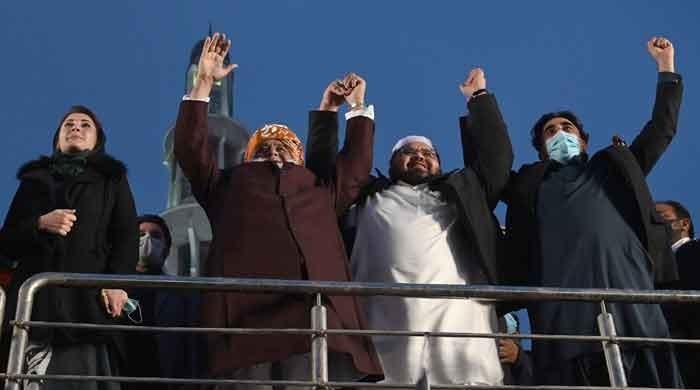 Serious flaws in the strategy of the 10-party opposition Ittehad-e-Pakistan Democratic Movement (PDM) led to a situation where the alliance looked like a “divided house” and was too weak to remove Prime Minister Imran Khan from office through a no-confidence motion. The recent proposal suggests that PPP chairman Bilawal Bhutto Zardari has some “backup support” that may not exist. They are also unprepared for any “protests” that would otherwise lead to unconstitutional means.

Whether one likes it or not, history is with the Prime Minister for two reasons. A no-confidence vote against any prime minister has never been successful. It failed in 1989, and even the opposition coalition, the IJI, had the support of the Establishment.

The latest move against the Senate chairman in 2020 was defeated despite an opposition majority in the Senate. Thus, the unannounced opposition to Bilawal Bhutto Zardari or the PPP’s change strategy and “sit-in” in Islamabad in March, clearly indicates that the party is in a defensive mode and that the PDM march plan is just nonsense. Sees as an exercise. The PPP may have wanted the PDM to continue its plan to hold public meetings and rallies, but it should not use its “Trump card” unless it is convinced to send the government home.

The main flaw in the PDM’s strategy was its own story. While former Prime Minister Nawaz Sharif, who has been in London for the past year, directly attacked the Establishment without knowing the situation on the ground, the PPP took a defensive stance and between the JUI-F Maulana Fazlur Rehman and some nations The paramilitary parties are left with no choice but to rely on holding one public meeting after another.

All this confusion has made the PDM movement a non-starter and now its allies have to work forward to build consensus among the parties and implement a new action plan.

Nawaz Sharif’s loud speeches not only closed all the doors for any chance of success but also brought the Prime Minister closer to the Establishment.

On the other hand, the PPP does not want to lose either the Sindh government or the Senate elections. Now, with the no-confidence motion, it is clear that the PPP is well aware of the ruling PTI that it cannot oust the government either through a no-confidence vote or through a motion. The PDM now sees a soft coalition of the opposition and its future looks bleak.

Therefore, for all practical purposes, the PDM has withdrawn its action plan in the last three months, ousting the Prime Minister by December 31 on the strategy of resigning from Parliament and Provincial Assemblies to oust the government. It started with a claim to do. The opposition also gave up its plan to march to Islamabad and now postponed it till March.

The PDM also became embroiled in a decision not to boycott the by-elections and to run in the Senate elections. In a way, they embraced the current democratic system, which they called “elected.”

It also appeared divided over a nationwide protest strategy, such as a strike or a court arrest. Although the PML-N has no history of running politics, the PPP has also changed its DNA from the past of resistance to peace in the post-Asif Ali Zardari era. All this puts a strain on the JUI-F as other nationalist parties like ANP, PKMAP or BNP (Mengal) have limited capacity.

On the other hand, the government, after learning from the poor handling of the PDM’s Multan rally, adopted another tough strategy and allowed opposition rallies and even demonstrations outside the ECP office in the red zone. The move destabilized the situation on the ground and favored the government.

The PDM, which had set a “deadline” of January 30 for the resignation of the prime minister, is now facing a crisis within itself and will have a deadline when the deadline passes without any future plans. And may face embarrassment.

It will be interesting to see the post-Senate election scenario as the government intends to make drastic changes to the system through legislation after gaining a majority in both houses. It will also be interesting to see how the opposition manages to hold local elections, which are likely to take place by May this year.

The PDM, in the last three months, has not been able to implement any of its “action plans”, confusing its own cadre and the position and file that led to its public participation in public meetings. Has been badly affected. Now, it seems, they will have to reconsider their “long march” plan as they have no choice but to extend the deadline for the resignation of the Prime Minister.

Despite the presence of all mainstream opposition parties, the PDM has never emerged as a strong coalition. It lacks seriousness and determination, which can be reflected in the fact that, unlike in previous alliances, they came out of counter-narrative, strong resolutions on national and international issues with great difficulty because we are the Movement for Restoration of Democracy (MPD). RD) as seen in the alliance. .

Differences in the PDM have existed since the day it was formed, starting with who should lead the coalition. While the PML-N suggested the name of Maulana Fazlur Rehman of the JUI-F, the PPP and the ANP suggested that the PDM chief should be replaced every month or every three months.

If former Prime Minister Nawaz Sharif’s premature attack on a powerful establishment surprised the Pakistan People’s Party (PPP), the latter’s defensive and soft opposition gave the impression that it was in a mode of movement or resistance. Are not. As a result, the coalition now has no choice but to adopt a new strategy.

It will also be interesting to see what other benefits former President Asif Ali Zardari will have in return other than a message of reconciliation in the Establishment. Knowing well that the no-confidence vote cannot be successful without the support of two strong allies of Prime Minister Imran Khan, the PML-Q and the MQM (Pakistan), on the suggestion of PPP Chairman Bilawal Bhutto. This clearly indicates that the PPP does not exist, is in a mood to go too far with the PDM and until then the government and the establishment have accepted the current system and the Prime Minister until there is a disagreement on policy matters. Is. At the moment, there is no sign of a rift, and thanks to the unpopular Prime Minister Nawaz Sharif’s stance, he is now thankful for all the differences he has formed.

The author is CEO, The News and Jang’s senior columnist and analyst