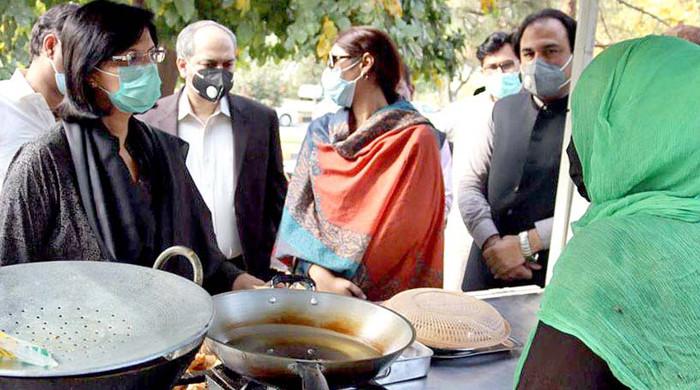 ISLAMABAD: Dr. Sania Nishtar visited the ‘Ehsan Rahiba’n’ site at G11 Markaz in the federal capital to talk to local street vendors who provided them with better vehicles and training to facilitate local sales activities. Has gone

The joint venture of Street Vending is a joint venture to create a conducive environment for street vendors in Islamabad. During the visit, Dr. Sania walked around the vending carts and met with local street vendors. It gained its perspective on the multi-stakeholder initiative and explored the possibilities of improving the ecosystem of street vendors. Under Ehsan’s umbrella, model vending vehicles with eco-friendly structure were recently handed over to a select number of existing vendors in the G-11.

Speaking to the media on the occasion of the visit, Dr. Sania said, “In line with the Prime Minister’s vision of creating a conducive environment for street vendors, Ehsan Rahiban has been instrumental in advancing local businesses to improve the overall environment.” Model Vending Initiative between Poverty Alleviation and Social Safety Division (PASSD), Capital Development Authority (CDA), Metropolitan Corporation Islamabad (MCI), ICT Management and Pakistan Institute of Development Economics (PIDE) It is the result of mutual cooperation.

Ehsan Raheeban is the first pilot project of its kind in the country in which street vendors are actively working with various government stakeholders to play an effective role in the local economy. Street vendors were happy to see Dr. Sania around them. He praised Ehsan, saying it was the first time the government had given him a vending license and better vehicles. Now, they can live a dignified life and do not have to flee when municipal officials visit the area.

The Ehsan Rahiba initiative is the result of months of work, consultation, and streamlining interventions between various government stakeholders aimed at improving the street vending ecosystem. Currently, Ehsas has provided prototype vending carts to 25 street vendors in the first phase. According to the Street Vendors Survey, there are a total of 85 street vendors operating in G-11, Marquez. The G-11 will replace the remaining 60 street vendors with better carts later this year.

Chairman Capital Development Authority (CDA), Amir Ali Ahmed elaborated on Prime Minister Imran Khan’s directive to address the plight of street vendors through a sustainable solution. He emphasized that this multi-faceted cooperation would further enhance its image in other areas of the city to facilitate more street vendors. CDA is working to make this street vendor model scalable and replicable for citizen Pakistan.

Syeda Shafaq Hashmi, Administrator, Metropolitan Corporation, reflects on the experience of handing over new vehicles to vendors at G-11 Markaz. With tears in his eyes, he said, the vendors with more than 20 years of experience selling were unbelievable. He never thought that any government official would approach him sympathetically and regularize him according to objective standards, without nepotism.

Zia Bande, focal person of Street Vendors Initiative, said that PIDE, in partnership with Ehsan, had conducted a survey of street vendors in various parts of Islamabad. He said that after the success of the pilot project in G11 Markaz, the initiative would be enhanced by coverage of additional areas and regularization of more street vendors. This intervention will not only provide a decent livelihood for the lower class people but will also improve the view of the city along with the space of aesthetically pleasing vehicles.